Each time we point our tyres down a new trail, we begin a new adventure with all the uncertainty, excitement and expectations that that entails.

Very few of these adventures turn out anything like we may have planned or expected, but for me that’s one of the main reasons why we should ride … just to find out.

I set off  to ride a route called Wonderland this morning.  It was just one of what looked like hundreds of options I could have ridden.  The only reason I was here and not somewhere else was that I found this one listed on a website as a ‘must ride’.  So I pointed my wheel down the path and rode.

I expected this to be an easy ride … it was just 3kms, and I planned to knock it over before getting something for breakfast.  However, this was not to be how today’s adventure worked out.

I quickly found myself being thrown around by slippery roots, stopped by rocks, mud and sharp technical corners and as I lost my confidence, I lost my momentum and suddenly every small challenge was insurmountable.  I became scared, I felt out of place, dwarfed by the challenge of this easy trail.  I wondered what I was doing here.  I didn’t want to be there and so I stopped and took some photos.  This is what I do, it reminds me that I don’t have to ride for the challenge, I can ride for the beauty that is around me, the beauty I wouldn’t see if I weren’t on this trail, riding.

Wonderland became a bit easier as I got into the lower sections, but it was still a slow ride, and as I crossed the highway, I almost almost took the option of just riding up the pathway alongside the highway to get back to my car, but fortunately my heart knew that I would not likely come this way again, so when I got to the junction, my heart turned my bike left back onto the intermediate trails, and I started what I expected to be a slow, agonising return to my car … just this time it would all be uphill.

Instead I got my first taste of just how wonderful these trails could be.  Somehow on this side of the road, the roots seemed like fun, the climbs were a breeze and the views remained amazing … 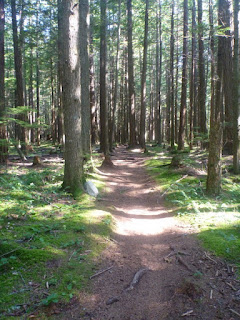 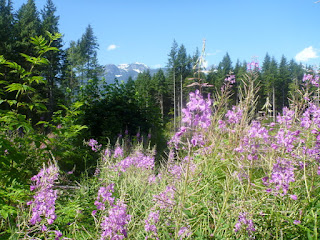 I actually passed a few other cyclists in this forest, and it dawned on me that wonderland was perhaps overused and suffering from it as people like myself, not knowing where to go, went where we were told.  We followed other peoples trails, and in doing so, we missed the joys of the road less travelled.

I pulled back up to my car about an hour after setting off, feeling a bit humbled, a bit exhilarated and yes, still a bit uncertain.

After a late and lazy brunch, I then headed off to another part of the trail network to ride the half nelson.  I had no idea what this trail was, except it wasn’t yet on my map, so I knew it was new, and I was also intrigued by a description I’d found of it which said something like “this trail has something for everyone from the beginner to the advanced”.  A bold claim.

As I didn’t have anyone to do a car shuffle with, I actually had to do the full nelson which basically means I had to first ride the 3.5kms up to the start of the track (along gravel roads) before getting to enjoy the downhill run.  Turns out this wasn’t such a chore … in fact it was downright magnificent climbing.  The views and forest were sublime, and the road grade ranged from easy to thigh busting … but it never got into push, push territory, and it was nice to feel my body working to get up the hill.

In what seemed like no time at all, I found myself at the top of the run, and I nearly had kittens … it was a black run which equals “most difficult””. 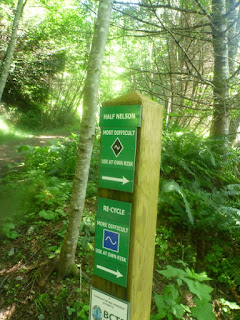 Having barely survived a blue (intermediate) run this morning, this was not what I wanted to see, and I confess for the briefest of moments I actually considered riding back down the way I had come up. A thought that was more fleeting than the flap of a butterflies wing.  I knew in my heart, that worst case scenario I could just push my bike down, and so I released my suspension and set off down the trail …

There are no pictures of the trail.  There couldn’t be … it was such a beautiful ride that I couldn’t capture it on camera, unless perhaps I took a photo of my big grin when I reached the bottom … that plus the twinkle in my eye as I considered riding back up and doing it again.  Maybe they could begin to capture how wonderful this ride is … maybe.

The Half Nelson is a free flowing descent with beautifully cambered switchbacks, jumps, jumps and more jumps.  Sure it has a few sections where you just throw all your weight back and say a prayer to the gods that your front wheel keeps rolling when it hits the bottom of whatever drop you’re going down, but this was high standard track building at its best, and you knew that if you rode it right, you’d come out OK.

It’s almost ludicrous as I sit here typing this to think that I almost didn’t go down there because someone had decided to put a little black sign at the top of it.

No, trails are adventures, and they need to be explored.  Sometimes, maybe even often, they won’t turn out to be the adventure you expect, so my advice is to stop expecting, just enjoy.  Ride.  Sometimes you have to plan things, but with trails, sometimes you can just point your tyre down a squiggly red line on a map and see where it takes you.  Even if it’s not the journey you expected, it may still be a journey you wanted to take, and if Wonderland taught me anything today it’s that even if the trail turns rough, goes bad and throws you around, well just get back up and keep going as you never know what’s around the next corner.  It might just be the perfect trail.

From wherever you are standing, enjoy the view, and follow your trail.