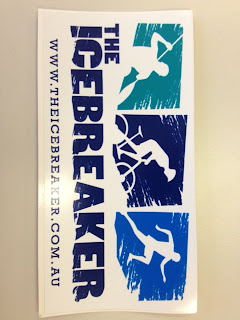 Now, I have been feeling really flat in my paddling lately.  The group I train with all seem to be getting further and further in front of me at training sessions, and in particular my starts have been killing me – usual story, there’s just too much of me to go from idle to full-on sprint in no seconds flat and so I hit a gasping wall of breathlessness just as I’m needing to go faster and get onto someones tail.

My strategy for this race was therefore to not start fast, well not too fast anyway.

I therefore set off towards the first turning buoy just turning the paddles over at a good pace, but at a pace that I knew my arms would give out before my lungs.  This meant I had to watch people I would have liked to stay with disappear into the distance, but on the upside this saved me from both blowing up early and from a crash as four boats in front of me were washed into each other by the safety boats wake (go figure).

At the first turn, I found myself in a group of three of four paddlers, but my arms were tiring and I was right on the edge of blow up, so rather than try and kill myself (as I usually do in a heroic one man futile charge to the front) I made the strategic decision to drop back behind the group as we rounded the second buoy and just get onto another paddlers wake.  This then allowed me to paddle out the first 10-15 minutes at around 85-90% pace whilst my heart, arms and lungs got into the game.  I do recall at this stage paddling along and thinking “Hey, these race tactics thingamajigs actually has something going for them.”

We came around the first point, and I got a bit close to the boat in front of me and we ‘touched’ briefly.  This was not good form, so I dropped back a bit, but then a few minutes later we touched a second time.  This was definitely not good form, so I back off again, only to touch again not 30 seconds later … wtf??? – I’m not that bad a paddler.

The guy in front of me, understandably, growled out a few choice words (at least I assumed he did, I couldn’t actually hear him) and I was feeling mortified anyway, so I dropped back 5 metres and let him get away (much to the chagrin of the boats sitting on my tail).  Once he was a clear boat length in front, I swung out to the side and started my own race, from where I was suddenly able to figure out what had happened – this guy was ‘spurting’ fast and slow, but it hadn’t been obvious sitting in behind him, and my steady pace had just kept throwing me into the back of him.  That said, I was the one tailgating, so it was my bad, and as we came around the far turnaround buoy I came up beside him and said so.  He (thankfully) seemed to take it quite well and just said he’d been worrying about capsizing.

It was at this point, that it suddenly dawned on me that I had come up alongside him.  I did a mental check: arms: feeling strong; lungs – working smoothly; heart rate – all under control… I was in the race!

I cheerfully put the hammer down and moved out ahead, though a quick head check behind found I was now towing at least two paddlers along behind me (darn it).  I tried a surge, but couldn’t sustain it long enough to break them, so settled into a strong rhythm to see if I could bridge across to the boat in front of me (a good 50 metres in front).  About half way across, I realised that I was working too hard, and just as I was about to come up with Plan C, I saw another faster boat coming up alongside me.

This was good.  I eased back just a little, and let him slowly slip by and get about a boat length in front and then I surged hoping to break the gap between me and the paddlers behind.  It didn’t work.  Well it half worked – I got across, but I had signaled my intentions with a head check so at least one paddler had managed to come across with me.

However, ignoring that one tailgater all was good as I came past the start at the end of the first lap.  I was behind a stronger paddler, I was feeling good, I was making a good pace … and I wasn’t coming last.  That was darn near a victory then and there, and in hindsight that may have been a good spot to call it a day …

Only kidding.  By the time we had gotten around the first buoy on the second lap, I had dropped the other paddlers behind me, except one new guy who was coming up on the inside.  The #$##ing sod, then proceeded to take a sharp inside line, but swung out wide on the exit forcing me to move off the wake of my nice new friend out front who was towing me, and despite my efforts to get back on, I eventually had to wave goodbye and watch as he paddled off into the distance …

Just as I was about to accept my fate, yet another fast guy came up beside me, so I did the only proper thing and jumped onto his wake, and pretty much that’s where I stayed for the whole second lap, I mean I did try and move out and do my own thing a few times, and I even got ahead once, but this guy was stronger than me and eventually we came into shore as a group in just over 58 minutes.

This put me respectfully “mid-pack” (I think) with (importantly) some tail-enders still a long way behind me.  Kim and Cath kindly grabbed my boat and told me to just “keep going” which I promptly did.

I still got overtaken by 3 to 5 runners going up the steep hill from the boat to the MTB transition, which was pretty depressing, and another 2 or 3 mountain bikers went straight past me as I exited transition (though these may have been the same people who ran past me as I had a pretty good transition) however at least half the bikes seemed to be still racked up, and this, for me, was good. 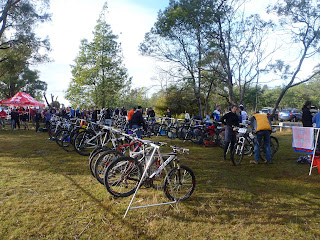 I had a strategy similar to my paddle strategy for my bike strategy:  Kim and I had ridden the course the day before (well at least we thought we had, turned out we got a few sections wrong) and I knew the first uphill section was going to make me feel ‘yuck’ (it’s a technical term) and I was spot on with my prediction so I didn’t let it get me down, I just focused on turning the pedals, keeping my self under the red line, and moving forward knowing that eventually all the blood that was up in my arms would get down to my legs and I’d start feeling better.

This didn’t happen.  Well it did happen, but I just couldn’t get enough air in to turn the pedals over fast enough and I seemed to spend the entire first lap counting the number of mountain bikers going past me … 1, 2, 3  … 6  … 9 and 10.  Yep, in the first lap I was passed by 10 riders, though I was somewhat mollified on the second lap as I began to suspect that most of those riders were the front of the pack riders doing their second lap, because the traffic dropped right off in the second lap and I was only passed by 2 or 3 more riders the whole way round.

﻿Now, I was going slow – I mean on the last section which we shared with the runners, I was having trouble overtaking some of them … and we were going downhill.  That’s the type of slow I am talking about here, but I can guarantee that I was passed by a maximum of 15-20 riders between the time I stepped out of my boat and the time I tagged Kim for the run … and many of those were doing their second lap, so that means I should have only lost 10 to15 places at most … in a race that was supposed to have had 150 competitors and where I came off the water mid pack.  However, when I pulled into the transition to rack my bike it looked full, really full.  I mean I felt like the last person off the course.  I look forward to seeing just how badly I did on that leg. 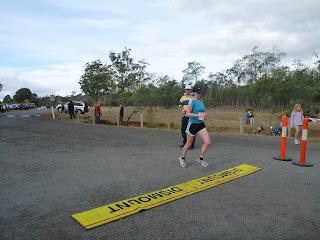 I mean look how clean she is, and then look at my race number from the mountain bike stage … 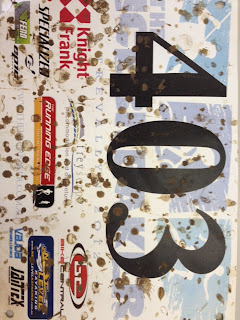 Epilogue
I know that compared to the front pack racers, my little efforts are feeble and pathetic.  I hold no qualms about that, but maybe my little efforts might make others realise that you don’t need to be any good at these events to enter and have a go.  It seems to me that too many of these events are becoming only for serious competitors.

Where are those of us who are just competing to get to the end, and not be the Lantern Rouge?