Why would anyone want to be a trip coordinator, and more importantly why would I?

To be honest, I’m not really sure, and despite the fact that I know I really shouldn’t be coordinating trips I seem to somehow be falling into the trap of coordinating them.

It started back in July last year whilst sitting around a campfire on Sloping Island when I asked the club members present why they weren’t going on more club trips. The resounding answer was that most trips were too fast paced and too far – so I put on some Wednesday night paddles at half pace and half distance, and I had some great turnouts and therefore promptly concluded I was a genius and a leader of the masses.

Then I put on a 100km overnight paddle from Huonville to Hobart, and no one turned up, not even me.  I mean seriously100kms?  I crawled back into my cave, deciding that I was obviously a misunderstood genius.

I stayed in my cave for quite a few months, but then my cousin Bec said she wanted to do something different for her birthday, and somehow I suggested a paddle and she jumped on the idea before I had a chance to realise what I had just done. Next, she suggested it would be good if some other people came along … and voila – I was once again coordinating a club trip.

After considering several options, we finally settled on a three day trip to Maria Island … somewhat encouraged by the offer of a half price ferry fare and accommodation (hey, it was Bec’s Birthday so I was paying …).

We had three other takers in addition to Bec, Kim and myself, but then one dropped out sick and another decided that the regional sea conditions looked a bit too scary for her and so we were down to four.  Luckily another club member, Jean, also had a proficient grade trip on for the weekend and only had one taker so we merged trips (well, sort of – they paddled to and from the island, whilst we put our boats on the ferry) and we were back up to six.

After a saga getting ourselves organised on Saturday, Kim, Bec and I headed out for a short paddle around the Ile De Nord, just off the coast of Maria Island, and although I give Bec and Kim full points for their efforts (neither having been in a kayak for years, if at all) I soon realised that I had two paddlers with me who probably shouldn’t be doing the trips we had planned over the next two days.  Lesson One for a trip coordinator ..  determining a paddlers skill levels after you get on the water is not a good idea.  realising that is genius people.

Don’t get me wrong, they were both good beginners, but we were planning on heading off around the outside of Maria Island, with large swells coming in off the Tasman Sea and nearly unbroken cliffs for 10kms … the kind of place that when things go wrong, they go really wrong.  This was not the place for “good beginners”.

Anyway, after a short 12km paddle where we went through kayaking signals, group paddling and the forward paddle stroke, we returned to the beach at Darlington just in time to see one of the most amazing sunsets I’ve ever seen.  Fingers of light lit up the coast of mainland Tasmania as the sun filtered through the trees.  It was just superb.  Unfortunately, my genius doesn’t extend to taking photographs of sunsets.  This is as close as I could get:

We had a BBQ with much red wine and cake that night to celebrate Bec’s birthday, then gloating to those who we left behind in their tents, we wandered back to our nice comfy beds in our room heated by a roaring log fire.  We then proceeded to lie awake for hours on end due to the screeching children in the room next door and a room that was so overheated we could have stepped into a sauna to cool down.

It was good to get back on the nice cool water the next morning. 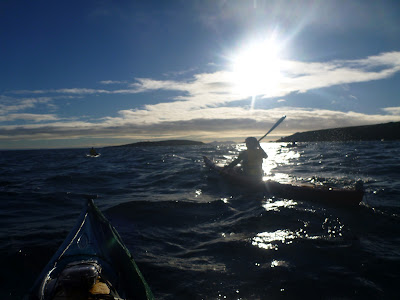 We had decided, despite my concerns, to head off towards beaching bay and amongst the hundred and one things that I forgot to do in my pre-launch safety briefing was to nominate a front paddler to set the pace for the group.

I therefore found myself in the interesting situation 3 or 4 kms into the trip where the stronger paddlers in the group would find themselves regularly stopping waiting for the newer paddlers to keep up … and of course the newer paddlers would then also stop paddling thinking that it was a break time.  Thankfully Jean pointed out the obvious to me … at this pace we would never make it to Beaching Bay … and so I fumbled my way through trying to tell my dear cousin and girlfriend to get their butts into gear as we needed to speed up or we’d never make it.

Thankfully geniuses aren’t expected to be good communicators with the common folk, which is why I think I did that bit less than well.  Lesson two: On a beginners trip, never assume the obvious, such as that people will realise that we need to keep paddling.

Fortunately, we ended up having darn near perfect weather conditions for the rest of the day, and so were easily able to not only potter down to Beaching Bay admiring the high cliffs and many waterfalls, but we got to dance in and out of rock gardens and caves and we even got a very easy landing on beaching bay for an early lunch.  That was pretty special.

After an early lunch, we had cool fun sliding 2 or 3 metres down the steep rocky beach as we seal launched into the light surf before retracing our steps back around to Darlington.

I learnt lesson three just after we got back on the water from Beaching Bay: clear communication is important, but still doesn’t work if people don’t know the rules.  In this case, after mumbling to one person that I wanted to paddle around a little outcropping, and then telling another person that we were paddling back, but she could head around the outcropping if she wanted to, the two of them happily set off towards the outcropping… and kept on going and going and going.  Rather than the quick sprint around the outcropping which I had envisaged, they went off exploring the next bay leaving the rest of us floating around waiting.

Jean and I held our paddles up in the air to signify they should return to the group immediately, and I blew my whistle again and again .. but the interesting thing was that because they didn’t really want to return to the group, they later told us that despite hearing our whistle, they basically just decided not to.  They figured everything was all right and so kept on exploring … just for a little bit longer.  There’s the lesson – don’t leave any doubt in people’s mind that when they hear a whistle and see a paddle in the air, that they should come now.  Also don’t forget to remind people that they should be constantly scanning and checking on the rest of the group.

Anyway, fortunately in this case it didn’t really matter, and we all enjoyed a great paddle back and I learnt more important lessons about how not to coordinate a trip.

After another great night of food, wine, good company … and thankfully sleep, we set off on day three without Kim who had decided to have a day off the water and go walking with Andreas instead (charmer that he is).  So it was just Bec, Tania, Jean, Jai and myself who set off down the inside of the island towards Booming Bay.

We stopped off at the Painted Cliffs, but spent more time watching a huge crayfish just off the cliffs than we did the cliffs themselves.

After continuing down to Four Mile Creek, Jean and Jai bid us farewell as they took a compass bearing and headed off to Rhebans Beach for their return leg to mainland Tasmania, whilst Bec, Tania and I continued on down to the Ruins just above Encampment Cove for a quick lunch. 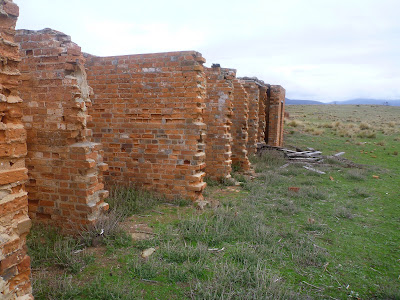 Although the day was overcast, it was still a beautiful days paddle with very little wind, crystal clear water, and more wombats running along the shore than I’ve seen in the last two years. 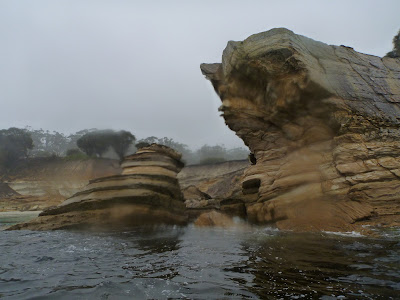 We even got a bit of rain on the way back, but it was never cold, and we managed to get back with enough time to get changed into our dry clothes and have a cup of coffee before it was time to load ourselves back onto the ferry for the trip home.

All up, I learned a lot of lessons in trip coordination over the course of the weekend, and importantly I think I began to understand a bit more why someone might want to be a trip coordinator … not only do you get to take people to places that they wouldn’t otherwise get to go … you get to chose where they go, and most importantly you all get to have a great time to boot.

As to my genius in trip coordination … well that might still need a little more proving up, but at least I haven’t killed anyone … yet.

Now where shall my next trip be …