I had a couple of great MTB rides planned for this weekend, but they all came crashing to a halt on Friday night when I gave my bike the once over to find that my front rotor was bent.  A trip into the bike shop early Saturday morning confirmed that there was nothing they could do until next Tuesday (Monday being a public holiday) so my long weekend plans needed a major rewrite.

In a bit of a funk, I decided to give me website some much needed love and attention, upgrading some software, adding a better front page menu system and then finally adding two new routes, Lime Bay and the Glenorchy Mountain Bike Park.  It takes a lllooonnnngggg time to add a new route … editing the GPS route into an actual track, figuring out the route notes, writing it all up and then uploading and checking it  … to cut a long story short it, before I knew it, it was 5.30pm and I’d pretty much exhausted the day.

Having had time to make some new plans, Sunday found Stephan and I launching off from Lauderdale canal at 10am for a paddle across to Dodges Ferry and back.

It was a beautiful morning for a paddle with just a little bit (half meter) rolling swelling and as we paddled directly across the bay we saw stacks of shearwaters, a gannet, quite a few fairy penguins and of course plenty of planes coming and going from Hobart airport nearby.

It was the first time I’ve ever headed straight across Frederick Henry Bay, and I realised afterwards that it may have been the furthest I’ve ever paddled directly off land: at the furthest point we were about 4.5kms from the nearest shore.

In one of my navigationally challenged moments, I mistook the Isle of Caves for Whale Rock and Carlton for Dodges so on the way out we headed a lot further out than I would have planned.  Thankfully Stephan wasn’t as lost as I was, and had planned to head this way anyway so that we could try a few runs in towards whale rock with the swell behind us.  We eventually landed in the surf at Park Beach, thankfully without taking out any surfers, children or ourselves. 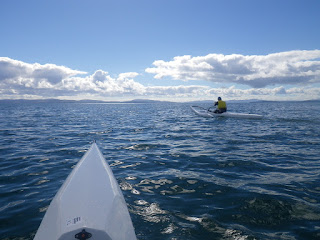 Having landed in the wrong spot, we quickly relaunched and made our way around to Dodges (though I almost paddled right past thinking Kim was meeting us in the next bay) where we had lunch and went kayaking with Marcus and Zara before I tried Stephan’s OC1, managing to capsize it even with an outrigger.

Unfortunately the wind was starting to pick up out in the bay, so we had to cut our rest stop short and retrace out steps back to Lauderdale.  It wasn’t a slog back, but there was now a meter of sea on top of the half meter swells and it was coming at us nearly side on which made for some interesting paddling.  If you check out my GPS log you’ll see lots of little zig zags on the way back as I had to keep running down wind to stay with Stephan who had to run with the seas more than I did due to his outrigger.

Then just to add one last piece of excitement we had to make our way through a sailing course with yachts coming at us from all directions.
All up we were paddling for about three and a half hours, although we were out there for closer to 5 hours including our lunch break, and covered a distance of just over 25kms.
Stephan was hurting a bit from the effort, but all was healed as we sat sipping ciders and (fairly terrible) fish and chips at the SandBar Cafe at Lauderdale.  We finished the day with a few more ciders at my place watching the IronMan Race on TV.
A Good Day.