So it’s been a bit quiet lately on the outdoor front, largely due to my having to have a wisdom tooth pulled a couple of weeks ago (I write this towards the end of November) and the subsequent development of a dry socket which left me spending nearly two weeks (and counting) with a throbbing sore jaw.

However, just before I went into the dentist’s chair I did manage to get away for a day’s ride to Eagles Eyrie out near Maydena.

This is a ride I’ve been meaning to do for quite some time, thinking that it might be a nice loop to add to tassietrails.org: that is starting at Maydena, head out to Junee Cave then follow old trails and backroads out onto Florentine Road, which I would then follow back around to Styx Road and the Styx Big Tree Reserve and finally the big climb up to Eyries Eagle lookout and of course the fun downhill run back down to Maydena.

I liked the idea of this ride as it seemed to link together quite a few cool points in the area and I thought it would include some nice tracks as well.  Unfortunately I was mainly wrong on this latter point.

I’d been out to Junee Cave back in August and it was a lovely drive through eucalypt forst and overhanging pine plantations, however between then and now there has been a road side logging operation go through (hey, it happens) which has turned what starts out as a lovely ride into a bit of an eyesore and a chore to ride.

After Junee Cave we continuned to follow the road through pine plantations around to Florentine Road, and then backtracked towards Styx Road as planned and began the long climb up over the pass.

Kim was having one of those days where the legs just weren’t working, so after a bit of a consult at the top of the pass on Styx Road we decided to cut out the drop back down to the Styx Big Tree Reserve and head staight up the power lines to the lookout.

Word from the wise: DON’T follow the track that runs up under the power lines, it ends after a couple of hundred metres and we ended up spending 20 minutes bashing our way through thick bush to get back out onto the main track.  There’s a small road that heads off a further 50 metres along the road towards the reserve – that’s the way to go.

To say that the start of this ride is steep is like saying the My Everest is high.  The climb up this track is just brutal, but it’s actually so steep that you can just sort of get in behind the bike and push.  I found myself doing lots of step counting (50 steps and rest, 50 steps and rest, 20 steps and rest).
However, it only took 25-30 minutes to get up the steep bit and from there it was some fun riding along the ridge, before the final steady but ridable road up to the lookout itself. 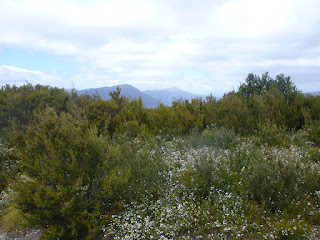 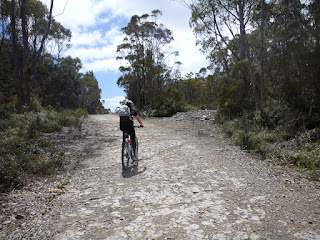 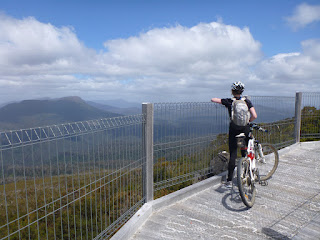 You should be aware that it can be slightly depressing standing outside the building in a biting wind looking inside at the nice comfy couches and coffee machine before crouching down in the lee of the building outside and eating your sandwiches, or in Kim’s case feeding it to the birds …

In the end, we ended up just following the main road (Roberts Road) back down to Maydena, though we did poke our heads down a few ‘trails’ but they all looked pretty extreme (yes, I’ve already locked into my to do list for a future solo ride).

Other than a small detour onto the road to cut out a big dog-leg (which some of us handled more gracefully than others) it was a pretty straightforward ride all the way back to Maydena.

We ended up going for a drive out to the Styx Big Tree Reserve for a look around, and also continued along the Styx Road to check out the river crossing up the alternative route to the lookout (just filing it away for another day). 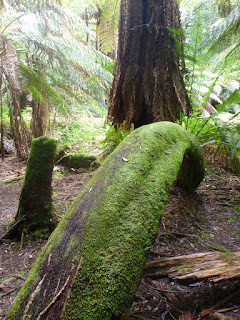 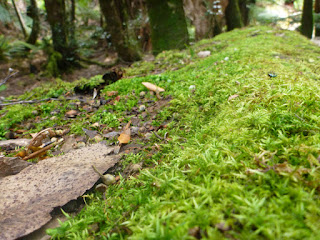 All up it was a pretty cool day, though if I had to rate the route I’d only give it a 2 out of 5.  I’m still keen to get back out there and do some more exploring.  I know there’s a route out there … somewhere.